Miracle, Pubbli Auto still exists and we didn't know it!

The surprises in life never end.

As in one of the best sequels to Back to the Future with Michael J. Fox, here we are projected from one day to the next in an alternative reality in which Pubbli Auto, a company that we thought closed in 1985 or more than 35 years, is still active. since the time of the rallies and is based in Milan.

Today it is driven by a "very good young man" who despite his young age is able to provide authentic documentation to certify the originality of the graphics on vintage cars (!).

These are just some of the amazing revelations that we have had the pleasure of knowing recently and in a completely fortuitous way, but ... let's proceed in order from the beginning of the story.

In February 2021 we are contacted by a car workshop of Turin, a company known for the preparation of historic cars. They want us to take part in an ambitious project entrusting us with the graphic restoration of the Lancia 037 Normende livery ex Bacchelli which would be followed by an official book on the restoration edited by Sergio Remondino.

The project seemed interesting to us, we visit their workshop, we talk for a long time, we view the photos in their possession and we make an offer to perform the paint graphics guaranteeing a processing carried out according to the artisanal methodology of the time that would have led to an aesthetic result coherent and beautiful without that sense of "new" and artificially perfect transmitted by those computer-made livery works and with the use of modern bodywork methods. A somewhat uphill negotiation begins as the two parties are not very close in numbers, so the project managers come to visit us in person in order to convince us to go to meet them. They also want to know if it was we (our father Vinicio in reality) who painted the original graphics of that car, we do our investigations and even knowing that our father at that time worked continuously directly for Fiat and Lancia we answer them that the specific one livery probably we did not make it, our father does not remember it and we have not found any inherent material.

But they are not give up, they tell us that they are admired and flattered to have the opportunity to include a historic company like ours in the project as it would give further value to this restoration and they return to the assault with renewed enthusiasm in order to let us take part in this project. The court tightens (more meetings and phone calls) until we capitulate by agreeing to run the car on their terms.

However, a very short time later, we receive a rather hasty phone call in which our interlocutor explained to us that they no longer needed us for the restoration, that their choice was irrevocable that in any case it was not us who made the original car (which we never claimed). The time to stay a few hours in disbelief and sincerely sorry in the face of a rather sudden and inexplicable change of ways, considering the always kind and respectful tones up to that moment, and let's go back to our other urgent workings.

The months pass and we forget this bizarre story, except that a few days ago life gives us the gift of being in the right place at the right time. During a visit to friends we happen to notice with the corner of the eye in a corner of the house the cover of a beautiful magazine in the world of rally, GRACE CLASSIC & SPORT CARS, No. 209 of the Month of November 2021, depicting the Lancia 037 Nordmende of 1982 ex Bacchelli just finished restoring!

We open the article of the magazine on page 20 to find out more and we almost have a heart attack, we discover that the rival company that had replaced us in work was none other than Pubbli Auto!

Here is what our incredulous eyes read (translated from Italian):

(...) “It was a very long job. Finally, when the bodywork was completed, it was sent to Milan by Publiauto, the company that had made the original livery. Also in this case we wanted to faithfully respect the initial one, all thanks to Gianni Mininni, the president of the Lancia Stratos Mania Club, who in Italy is considered the greatest connoisseur of that car. His tips were the right ones because his father was the one who physically drew the liveries, from Alitalia to Martini. Thanks to Mininni's research work, it was ascertained what exactly the colors of the livery were and only then did the car go to Publiauto, now run by a very good young man, who also provided all the certifications. "(. ..)

We read and reread but we must surrender to the evidence, we have suddenly been thrown into an alternative 2021, a new possible present. As in the famous film by M.J. Fox. here too 1985 is the key year from which a new alternative reality was born.

In this new alternative present, Pubbli Auto did not close its doors definitively in 1985 as we and the many insiders, engineers, mechanics, enthusiasts of the time remembered, but has continued blissfully to carry on the business up to the present day without our knowledge of all.

In truth .... to be honest it seems a little different company than we remembered it. Well, of course, it is not from Turin, it is Milanese (the word TORINO must have stuck on the car)! She has even lost a B (oops!) And is called Publiauto but we are sure: despite these "insignificant" details it can only be her because the article states it with certainty, it is the same company that made the original livery of the Lancia 037 Nordmende! 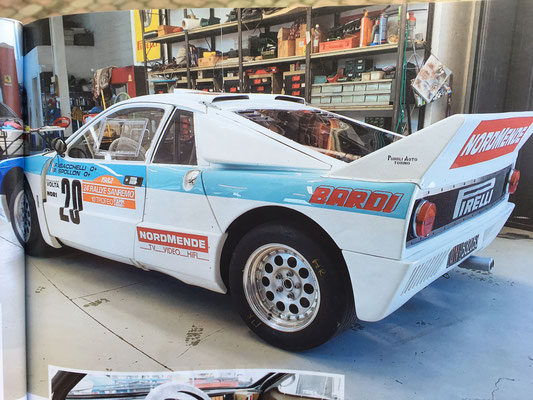 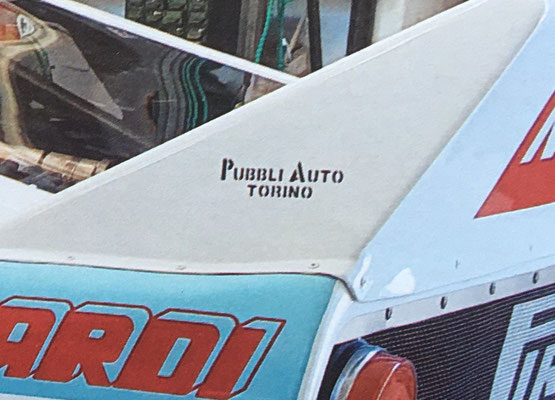 Only now are we able to fully justify the reaction, at first glance inexplicable, of the clients who after having praised and courted us for days have left us on the spot without any second thoughts. But how to blame them once they learned that they were faced with none other than the real authors of the original graphics back in 1982?!? A reallucky break !

Continuing to read, we also learn that the only possibility to get in touch with this legendary company lost and then resurrected like a phoenix from the ashes at 35 years and 200 km away from the original Turin headquarters is to consult the son of "the one who physically drew the liveries "in Pubbli Auto and who, judging from what we read in the article, also seems to be a profound connoisseur of the Lancia 037 (he is certainly recognized for being a great connoisseur of the history of Lancia Stratos, but that was also an expert on 037 is a recent discovery ...).

There's more. The article also mentions a "very good young man" whose name is unjustly not mentioned (or perhaps his absence was more of a blessing, because we know that in certain situations the less one puts his face, the better ... and we understand it very well!).

Both members of this interesting partnership, the "son of him" and the "very good young man", have in common an excellent curriculum in the field of historical manufacturing :

In other times someone would say: zero tituli (Zero titles)

The duo thus constituted, united by this amazing primacy, succeeds in the miracle of producing credible certifications on a historical restoration by winning the competition of a company with more than 50 years of seniority which, with artisanal methodology starting from the 70s, has made a consistent number of liveries on racing cars and which still retains a heritage of historical documents unique of its kind.

Everything OK, of course !

It does not matter if perhaps the effect of the final result of the work - at least in our eyes - will not be exactly similar and consistent to that of the time, after all, whispering the name Pubbli Auto can set in motion unpredictable consequences; the Sound of this double Magic Word spreads in the air, intoxicating and seducing the minds of the less savvy and sometimes even even manages to overturn the fate of jobs already assigned to others.

At this point in the story, you may wonder why we don't organize a nice Pubbli Auto - Pubbli Mais reunion ?

Well, honestly, the idea that in this alternative reality Pubbli Auto is never dead simply makes us euphoric, because we can only imagine how many jobs they will have done in these last 35 years, that is from 1985 to today, and how many wonderful photo galleries they will have to show us. We could be the first in the world to be able to admire their works and their new headquarters, since after careful research on the web of this Public Auto of Milan we strangely did not find the slightest trace.

Unfortunately, the film Back to the Future teaches, we are also aware that a meeting in this timeline between "us" and "them" could give rise to a space-time paradox that not even Back to the Future Doc could ever mend. Perhaps this time it is better to give up, rather recalling the Public Auto of the past, when the timeline had not yet been altered.

We end this story with a proud look to the sky, always reminding all smart people that we, as Defender of the Past and Tradition, will ALWAYS be constantly watching over all web platforms and paper newspapers so that the information that aims to alter the memory of the reality of the Glorious Era of Rally are reported, brought to light and finally delivered to public opinion!

But this is another movie ...

FOR THOSE WHO WANT TO KNOW MORE

Historic intertwining: the handover between Pubbli Auto and Pubbli Mais

To exmine in depth the origins and the strange historical intertwining that connect Pubbli Mais, Pubbli Auto and IPAI.

The history of the birth of Pubbli Mais and the historical context in which it was born, from the words of the founder.

MAGAZINE
We wish to clarify that GRACE CLASSIC & SPORT CARS is a very nice magazine, certainly recommended to all fans, and we would like to dispense it from any liability for misunderstandings and inaccuracies reported as probably the writer has probably transcribed the information that was provided to him (although perhaps for other occasions concerning articles on historical restorations a small check would be appropriate).